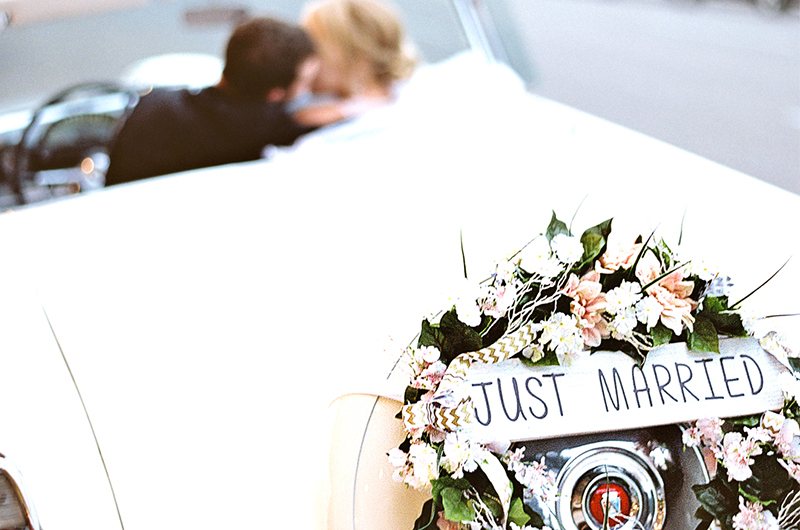 Lee had been asking to go out to a local corn maze where he was employed for about a week, so when the weather cleared up, he took me out the maze. He wanted to go on the hay ride to look at all of the lit jack-o-lanterns, so he asked the driver to take us by ourselves out. We rode through all of the jack-o-lanterns, and at the end of the line were two pumpkins that said “Will You Marry Me?” and he got down on one knee with the ring in his hand.

Our plan for the wedding was to save as much money as possible. My mom and I spent the next seven months planning all of the details that went into the big day. We did the decorations ourselves instead of hiring an event planner. We talked to vendors and looked at venues and addressed invitations. That chapter of Lee and my life was so busy and overwhelming and chaotic, but we grew together as a couple and learned more and more about each other and the life that we would one day share as a married couple.

Our wedding day was perfect. It started off as a brisk morning with chances of rain, but by the end of the afternoon, the weather was absolutely beautiful. We each spent time with our respective bridal party members getting ready during the morning, and then we met for our first look underneath a beautiful clock tower in the middle of town. We took our pictures, and then went to the church for the ceremony. The ceremony was officiated by one of our best friends and was written by us, so each word that was spoken carried meaning for us. When the ceremony ended, we made our way to the top of the tallest building in Amarillo to spend the evening eating and dancing the night away with our friends and family. The night ended with us driving away in Lee’s grandfather’s white Thunderbird convertible, waving goodbye to those who attended.

Our honeymoon was the trip of a lifetime. We traveled first class on Etihad Airways to Abu Dhabi, United Arab Emirates. We spent six days at the Atlantis, The Palm resort in Dubai, and five days at the Qsar al Sarab, a resort in the middle of the Rub’Al Khali desert. At the Atlantis resort, we swam with the dolphins, went scuba diving, laid at the pool, spent time at the water park, and ate some pretty amazing food. When we left the Atlantis, we drove to the middle of the largest uninterrupted sand desert, where we were greeted by a beautiful resort surrounded by sand dunes. There, we rode camels, visited the spa, swam in the luxury pool, and ate at their five-star restaurant. We also visited the Burj Khalifa, the world’s tallest building, and the Dubai Mall, the world’s largest mall. It was truly an unforgettable trip.