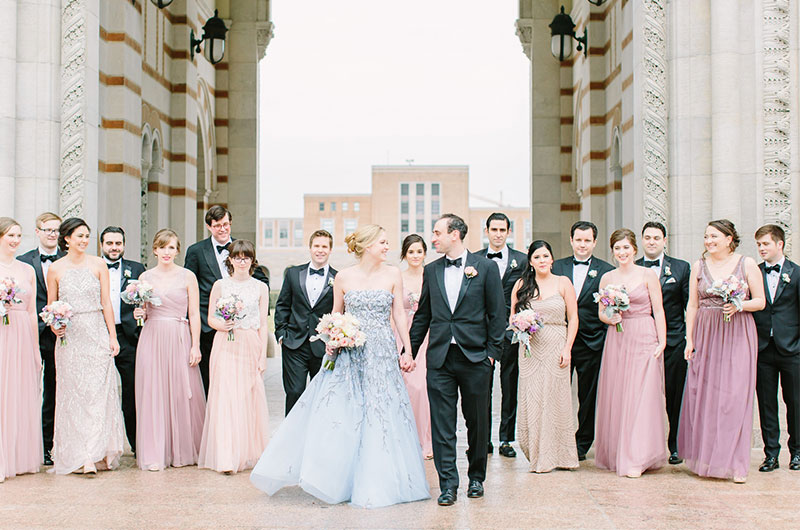 Dustin proposed on the beach in Port Aransas, TX. Port A is a special place to me and my family and a place that Dustin and I have enjoyed together since the beginning of our relationship. It was December and very quiet in Port A. We had the beach completely to ourselves. Suddenly, Dustin stopped walking, dropped to one knee, and asked me to marry him. I said, “Of course!” We then opened champagne and called our family and friends to share the news.

I was a Bridal Consultant for 8 years, so the one thing I knew for sure was that I wanted the gown to be something special, completely unique, and preferably not white. (I had seen enough white dresses in my career.) Finding the dress was the most stressful part for me. My mom and I flew to New York and ended up having the designer customize it for me. Believe it or not, it was originally green! Other than that, the prep was very stress free. It was important to Dustin and I that it felt like both of us, and most of all that it was a great time!

The whole day went smoothly and was so much fun. I’m so glad we had a first look because it gave us a moment to just be together before all of the craziness began. We didn’t feel rushed. The groomsmen even had time to run through Chick-Fil-A in the limo on the way over! Father Leon did a great job with the ceremony. It felt personal to us and incorporated some Jewish traditions for Dustin’s side of the family. The reception was an absolute blast! We got so many compliments on the band, Blind Date. They had everyone up and dancing all night, even during dinner. I loved all of the unique details we included: a mariachi band during cocktail hour, a Scotch Bar, and of course New York Cheesecake from Junior’s for the groom’s cake. Dustin had to make sure there was a New York reference in there somewhere!

We took a delayed honeymoon at the beginning of June and spent two wonderful weeks in Europe. We spent the first week in Greece visiting Mykonos and Santorini, and then the second week in the French Riviera. It was the perfect balance of adventure and relaxation.

Who Made the Cake!