Very Peri is 2022 Pantone Color of The Year

The wedding day rhyme symbolizing luck has been a staple in the bridal world since the English folktale started centuries ago. Even today, you can find relics of the past and tokens of the present that find their way down the aisle with the bride. So, where does the modern bride find her new something blue? Pantone might have the answer to your question, as they’ve recently announced Very Peri is the 2022 Pantone color of the year.  A vibrant lavender-toned hue that designers are fully embracing.

Pantone has announced the industry-standard selection since 1999, naming Cerulean the first-ever chosen color of the year. Cerulean was a subtle hue of blue that’s soothing to the eye. 22 years later, Pantone has continued the tradition of choosing a color that strives to reflect the feelings of the current times.

“We are living in transformative times.” Pantone released on their LinkedIn, “As we emerge from an intense period of isolation, our notions and standards are changing. Displaying carefree confidence and daring curiosity that animates our creative spirit, inquisitive and intriguing PANTONE 17-3938 Very Peri helps us to embrace this altered landscape of possibilities, opening us up to a new vision as we rewrite our lives.”

The symbolic color, as seen below, can find its way into every aspect of the wedding season, from the bridal party to the wedding guests or a fabulous accessory. The featured looks are straight off the runway as inspiration for the novel color for this new season. 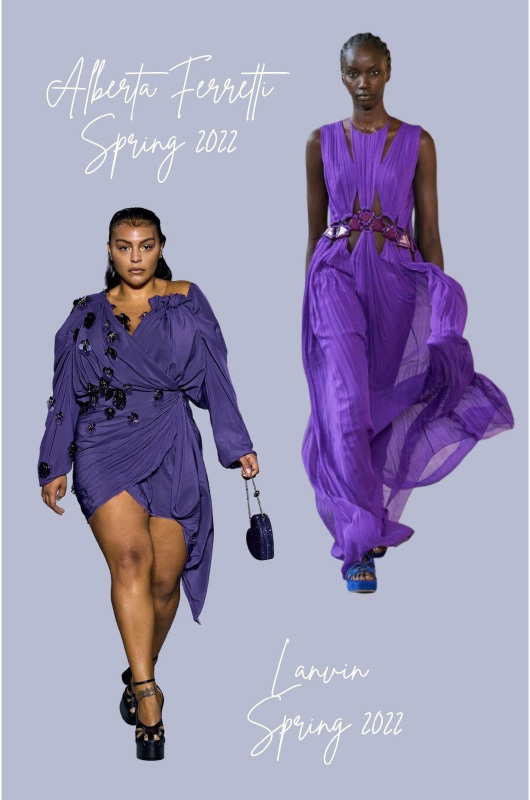 Rehearsal Dinner
Looking for the perfect ensemble for the day before? How about embracing a flowing ensemble in a commanding yet soft shade of light purple that says confidence and fun.

Dress Right: Spring 2022 Alberta Ferretti.
The look itself, a flow of vibrancy with a softness that provides a wind of feminine flair. The Alberta Ferretti brand describes this on their website as “the ability to live the present time and respond with sturdy lightness.” The look can be made accessible to every bride by playing with flow in contrast to structured pieces.

Dress Left: Spring 2022 Lanvin. A play on fabric shape and floral elements makes this dress a work of art. The dramatic layering of the skirt highlights the wearers legs, and the long sleeves add drama. 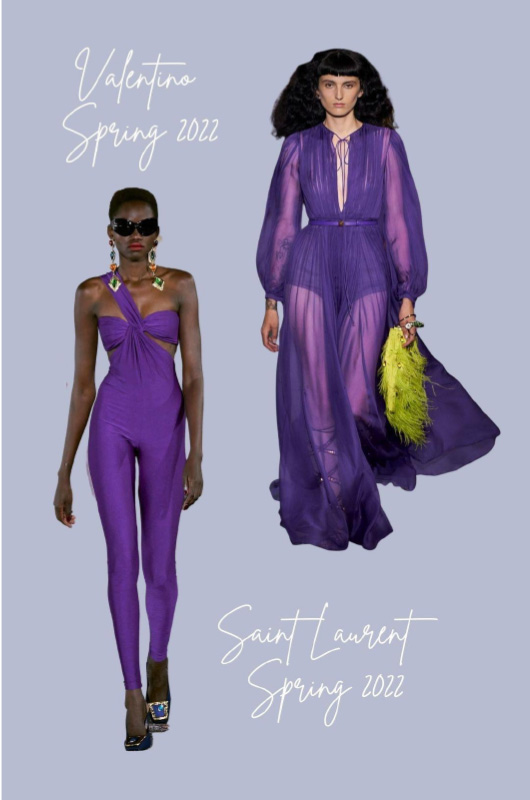 Bachelorette Party
When TLC comes on and the bachelorette party gets handed the hot mic – the fit needs to stand the test of time. Feeling confident in what you are wearing is essential.

Suit Left: Saint Laurent Spring 2022. A powerful suit that turns heads. The smooth fabric and bright color draw attention to the natural silhouette of the body.

Saint Laurent as a community is moving forward with fashion and sustainability, stating on its website “Recognizing the complex nature of sustainability, the house is engaged in a broad range of initiatives aimed at protecting human rights and dignity, preserving the environment, and implementing responsible sourcing.”

Jumpsuit Dress Above Right: Valentino Rendez-Vous Spring 2022. The flowing piece provides depth alongside the dramatic deep front cut. Valentino describes their image on its website as “a global vision of style.” 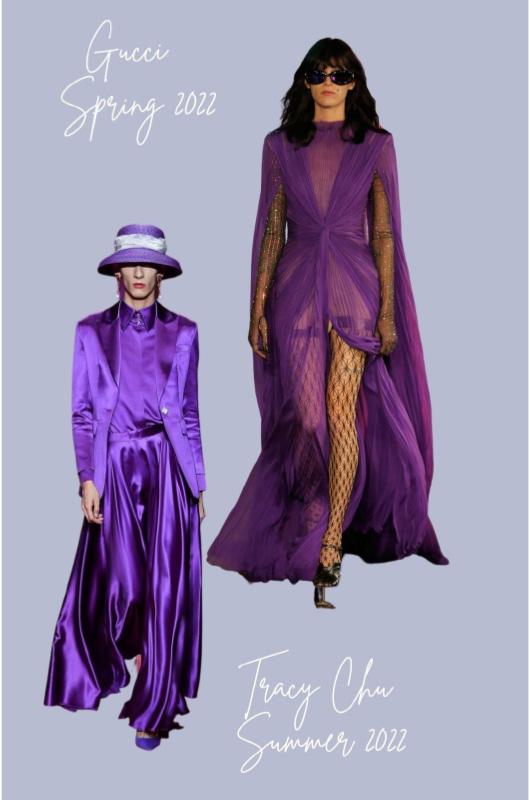 What is a Peri? A quick google search can tell you that Peri, as defined by Merriam-Webster dictionary, is a supernatural being. In “Persian folklore descended from fallen angels and excluded from paradise until penance is accomplished.” The color pairs beautifully with neutral tones or shades of deep plumb.

Suit Left: Tracy Chu Summer 2022. The movement in the suit is offset but the structure on the silhouette. A breathtaking new take on the movement of suites and the use of vibrant colors. From Tracy Chu’s websites, “不断拓展产品创新能力以及产品线，主设计师及其团队已经在业内斩获了极高的声誉. TRACY CHU 如今以去渠道化的“极致性价比”全新业态全情投入线上业务.” Loosely translating to Chu’s ever-expanding product innovation and cost-effective business model.

Dress Above Right: Spring 2022 Gucci. The flowing dress breathes with movement. The layers provide depth while remaining light in an elegant manner. The Gucci website states, “Eclectic, contemporary, romantic—Gucci products represent the pinnacle of Italian craftsmanship and are unsurpassed for their quality and attention to detail.” 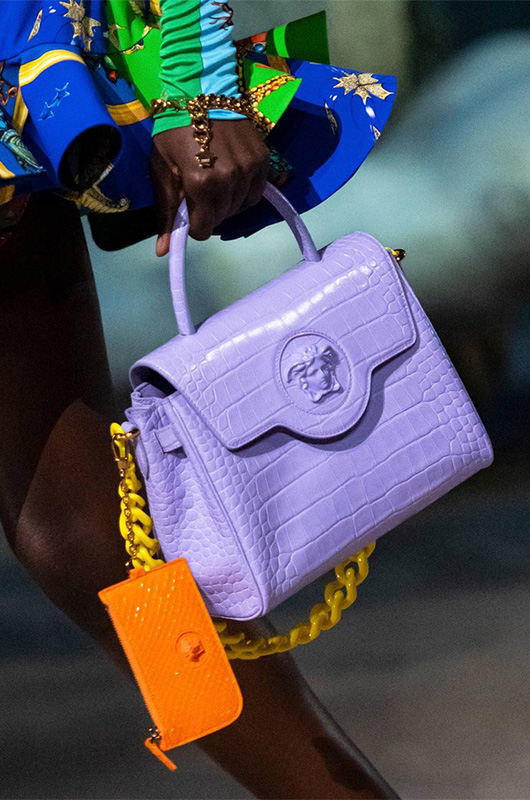 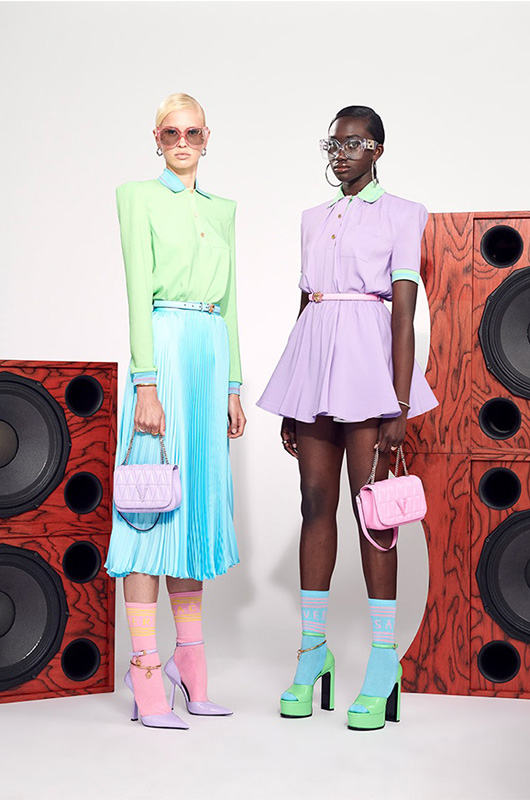 If you are a soon-to-be bride in search of something new and something blue to include in your wedding, we hope you find bridal inspiration from the featured designers.  Like them, we are thrilled that Very Peri is the 2022 Pantone color of the year. 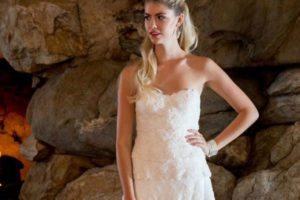 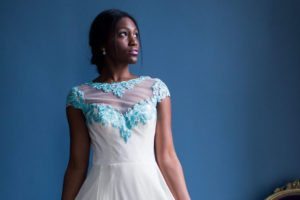 Pop in Blue with Winnie Couture 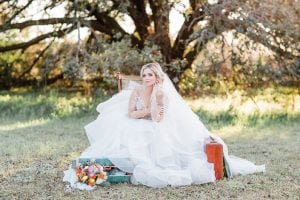