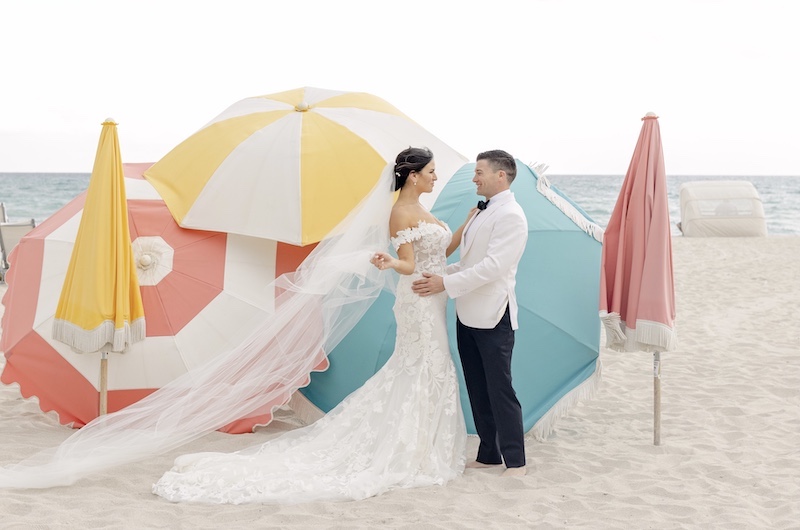 On the edge of a cliff, as the sun was setting over Santorini, Eric got down on one knee and asked Leticia the most important, yet easiest to answer, question of her life. They had been traveling through Greece for over a week, and after many ATV adventures and all-day beach parties, the couple arrived in what has to be one of the most romantic places on earth, Santorini. Coincidentally enough, Leticia’s nails were manicured and her suitcase was packed with white outfits. When the two of them arrived at the restaurant for dinner, the host led them to a spectacular table perched on the edge of a cliff with sweeping views of the caldera (little did Leticia know, this reservation had been pre-arranged months in advance). Before they could sit down, Eric asked her to marry him, and they spent the rest of the night on cloud nine, toasting to their future. 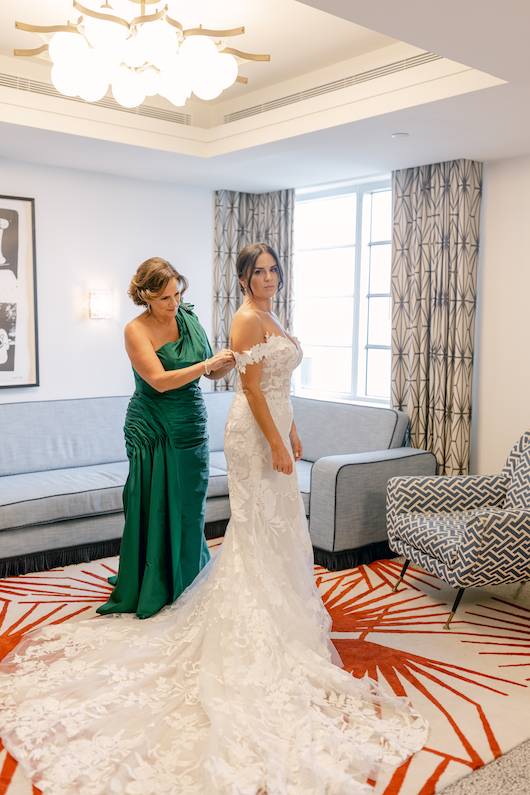 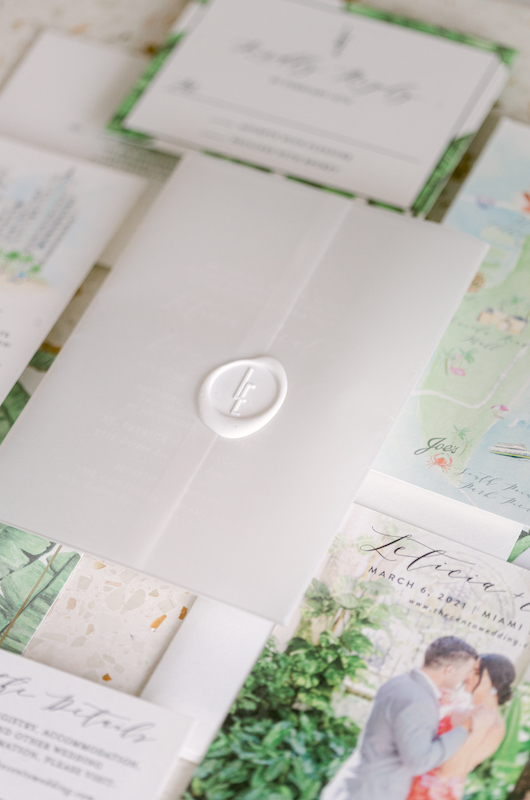 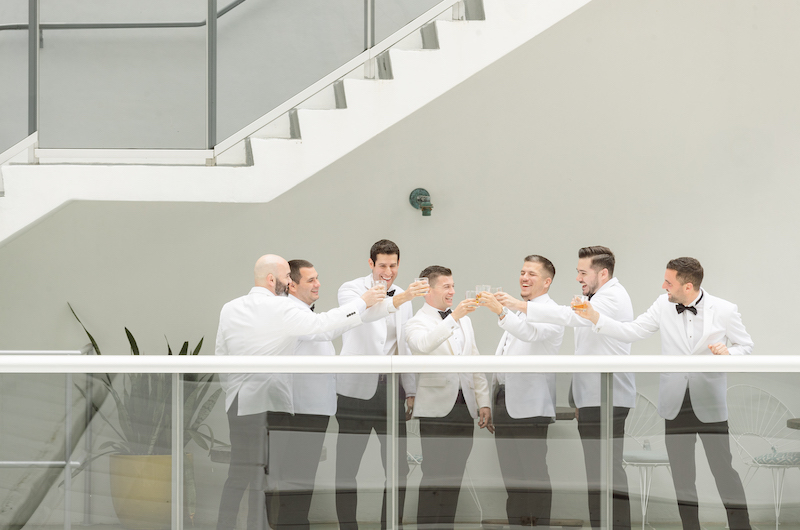 Leticia has dreamed of her wedding her entire life so as soon as Eric proposed, they started planning for the big day. The pair knew that wanted to say “I do” in Miami Beach, Florida and after touring three different venues, Leticia and Eric both fell in love with The Confidante Miami Beach. The property boasts a retro-glam vibe that the two felt matched their relationship and personalities perfectly. The hotel’s wedding specialists worked closely with KVB Events to bring Leticia and Eric’s wedding day vision to life. The groom and bride-to-be wanted an intimate and lively celebration and for the day to reflect who they are as a couple. Two special requests for the big day included tropical florals and a Cuban-inspired menu. Leticia and Eric’s invitation suite matched their theme with hand-painted tropical leaf motifs and a custom logo with their initials. This design played a part throughout the planning process from the save-the-dates to the reception cocktail napkins. The welcome bags for their guests included a watercolor map of Miami Beach and highlighted some of the couple’s favorite spots in the area. Leticia and Eric were set to wed in the Fall of 2020 but instead became husband and wife in 2021 due to the COVID pandemic. 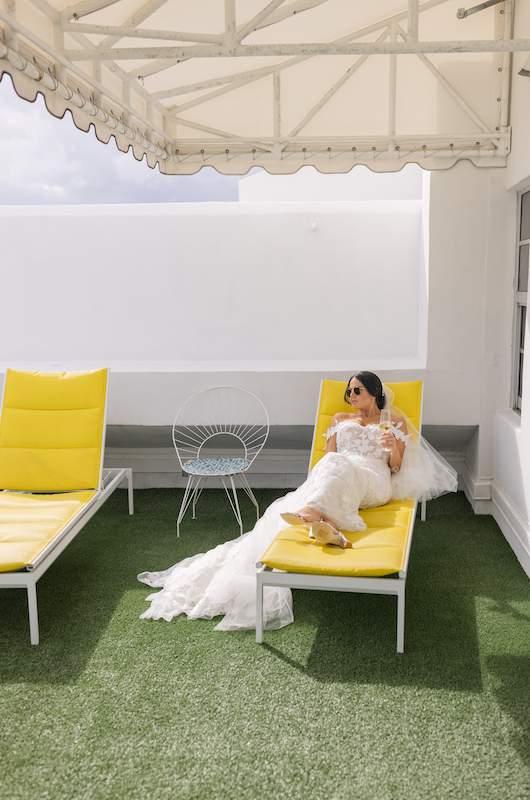 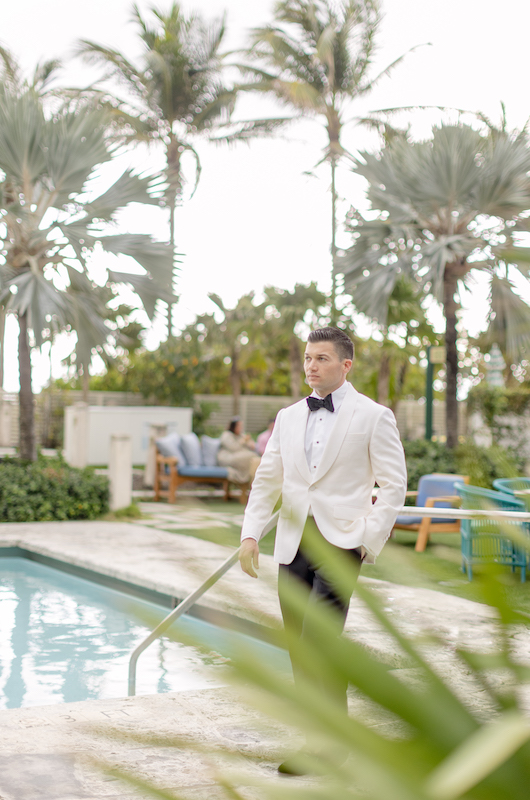 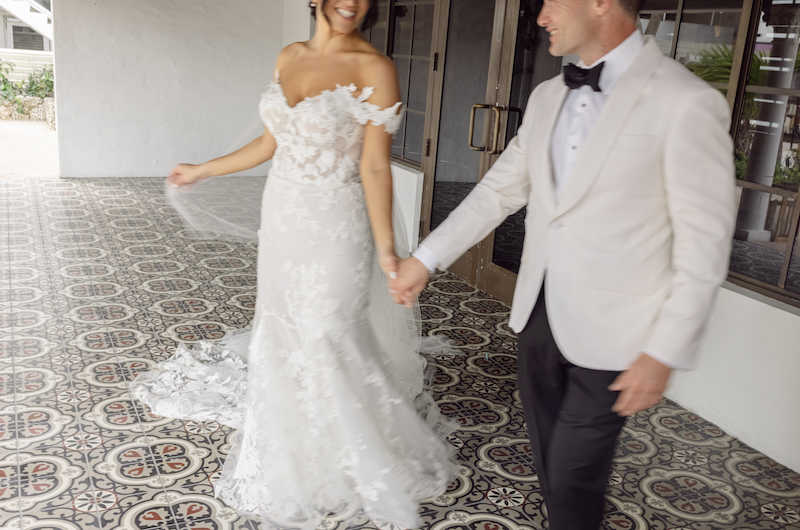 The wedding weekend kicked off with poolside drinks at The Confidante Miami Beach, where the soon-to-be Mr. and Mrs. were able to mingle with their guests, including those that had traveled from out of town. The morning of, Leticia and her “man of honor” took a walk on the beach to calm her jitters and appreciate the beautiful oceanfront setting. She and Eric got ready separately with their closest friends and family. Leticia’s mom helped her fashion her wedding dress which included snapping the buttons on her gown (which were from her mom’s wedding) and acted as the bride’s “something old”. For “something borrowed”, Leticia wrapped her bouquet with Eric’s late grandmother’s crystal rosary. Before seeing her groom, she did a first look with her dad and brother, which Leticia felt was one of the most emotional parts of the day. She and Eric also chose to do a first look which was amazing and allowed them to enjoy some time alone together before the rest of the day unfolded. The couple exchanged vows at St. Patrick Catholic Church, just down the road from the hotel. Following the nuptials, everyone enjoyed cocktail hour in The Confidante’s Crown Room. “His and her” signature drinks were served and included spicy margaritas along with old fashions. Freshly shucked oysters by Oysters XO were also served. The reception featured delicious Cuban dishes, beautiful toasts, and a lively Latin band. The party continued at the 1930s House until 2 am. The coffee cart and popsicles were such a big hit as was the hand-rolled cigar station that wrapped the tobacco in Leticia and Eric’s wedding logo for a special touch. 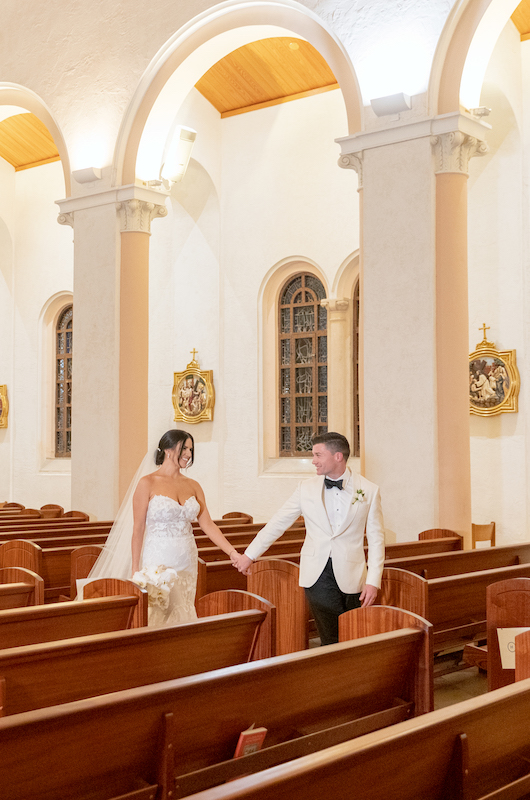 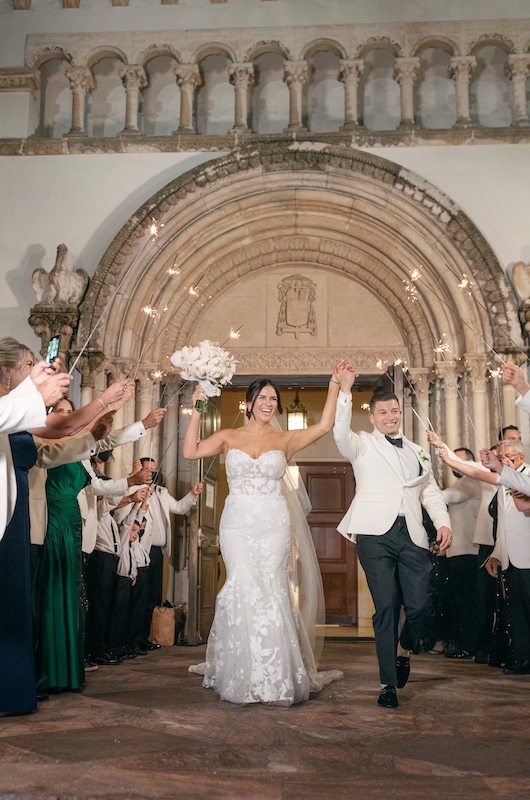 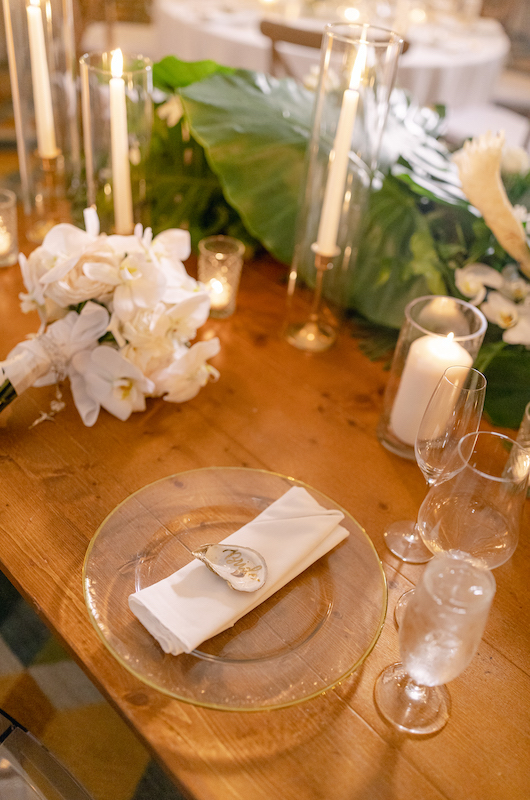 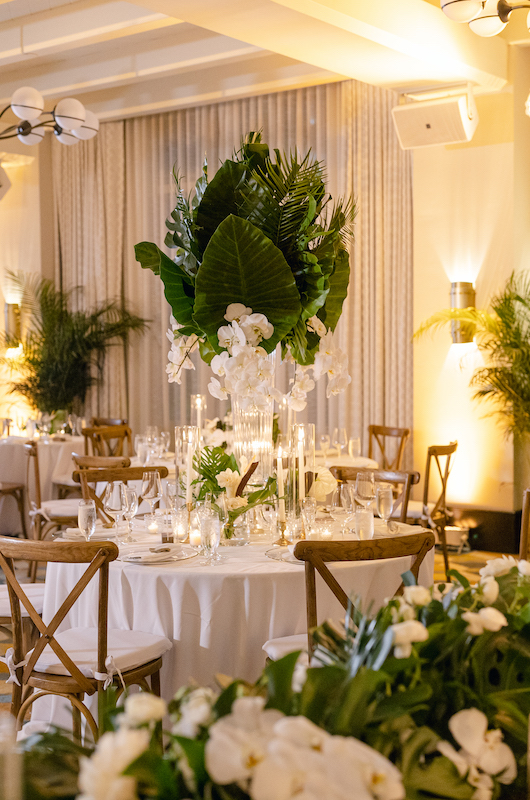 The day after the wedding, Leticia and Eric spent time poolside with their family at The Confidante’s retro-chic “backyard” oasis. It was then time for the newlyweds to board their flight to East Africa for an adventurous honeymoon. From there, they journeyed to the Maldives for a relaxing island retreat. From waking up to Giraffes grazing outside of their window at Giraffe Manor, sipping Gin and Tonics while preparing for safari, to taking in the water views from their over-the-water bungalow at the St. Regis Maldives Vommuli, they both agreed it was the perfect way to kick-off of this new and exciting life chapter. 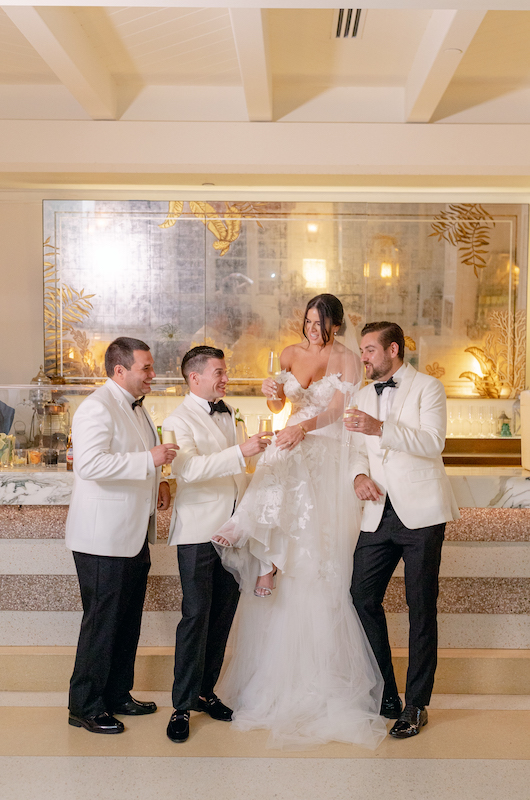 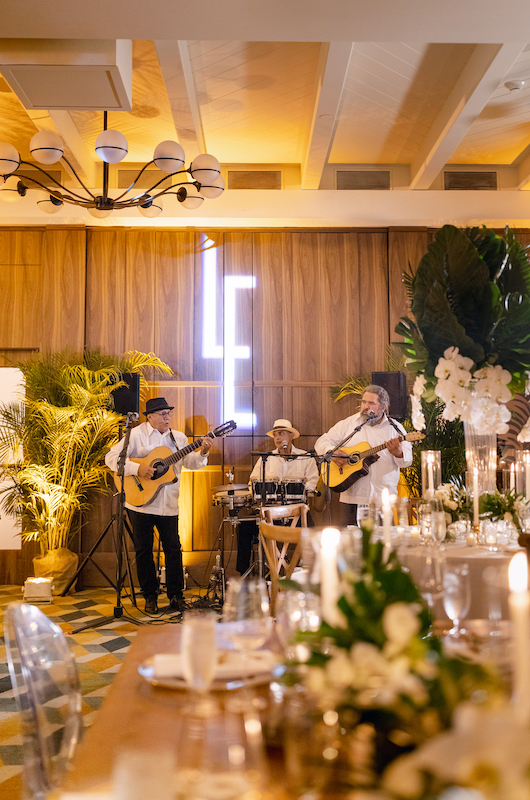 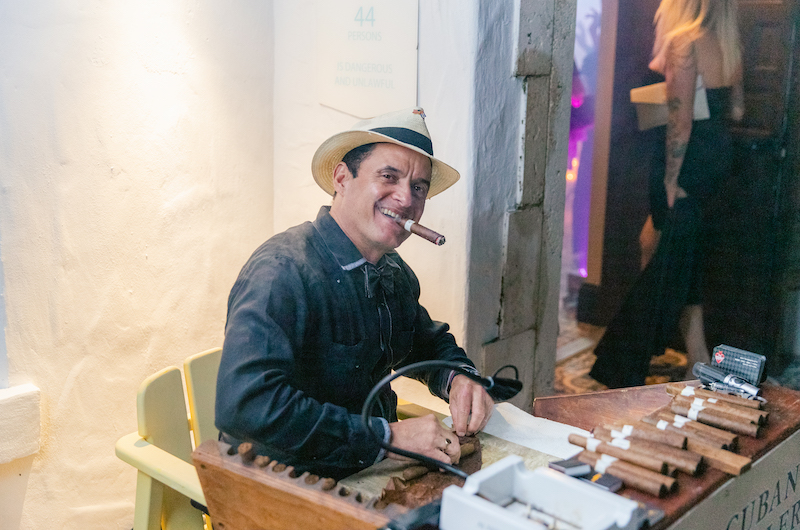 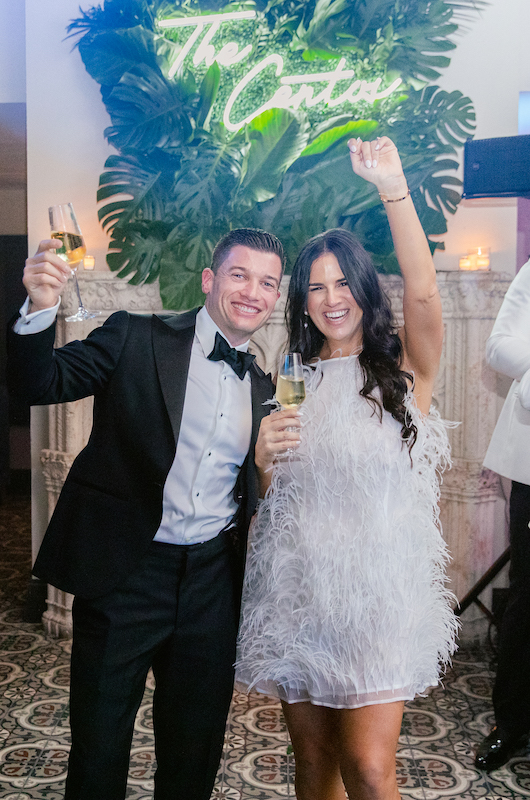 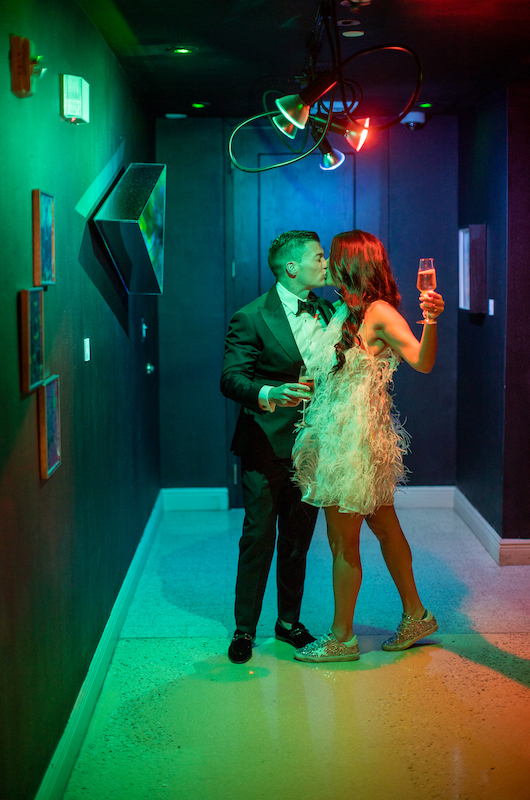 Your Face by Trace