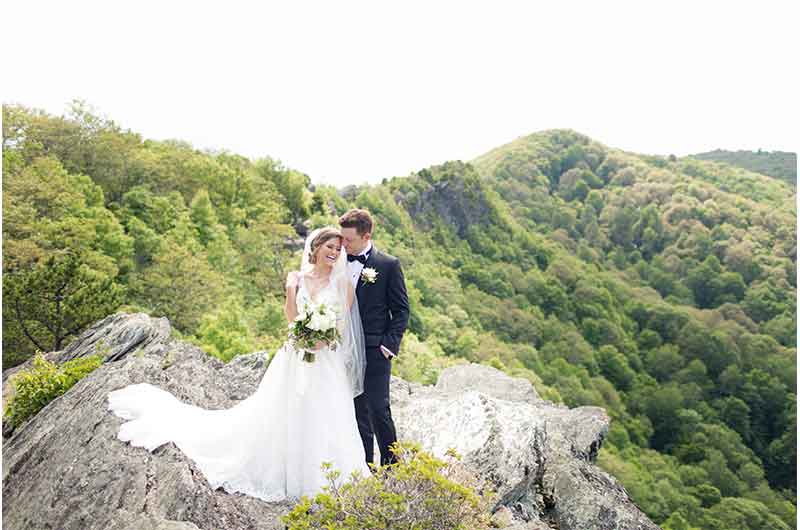 High up in the Appalachian Mountains, Scotty got down on one knee and proposed to his high school sweetheart, Gabi. After being together for such a long time, we imagined the proposal wasn’t a total surprise to Gabi, but we’re sure she was wondering when it might happen. “It was a little fishy,” says Gabi, “he planned a big trip to the mountains in advance, and Scotty is not a planner.” The trail they hiked was one they had found two years earlier while searching for a waterfall in the mountains. They had gotten a little lost, but the trail they stumbled upon ended with a breathtaking view of the mountains in a remote area near Boone, North Carolina. After spending time taking in the scenery, Scotty knew right then that “This Is It!”, this was where he’d bring Gabi back when it was time to pop the question. The grandeur of the proposal served as inspiration to plan a beautiful mountain top wedding.

Scotty & Gabi were both raised in close knit southern families, and wanted their wedding to feel personal and meaningful with a focus on God and family. They opted to plan the wedding themselves and even DIY’d much of the wedding’s decor. Scotty told us that while Gabi chose things like flowers, colors, and decor, he naturally had a big hand in choosing the music and entertainment. According to Gabi, her family has a very ‘DIY’ type of attitude and was very helpful in both curating and creating their dream day. Her family handmade a wooden guest book and brought in antiques and family heirlooms for a personal touch. Scotty shared with us that they still have most of the signage made by their families hanging on the walls of their home.

The wedding was a grand weekend long affair, allowing the couple quality time to spend with family and friends. The wedding venue, Twickenham House & Hall, is a large estate capable to accommodate the entire bridal party as well as Gabi and Scotty’s families for the duration. They kicked off the weekend with a big shrimp boil on Thursday night in homage to Gabi’s Cajun roots. The next day was spent playing “Clash of the Cajuns” which was a competition between bridal parties. It included sack races and cornhole and ended in a heated life-sized Jenga tournament. On the big day, the wedding was filled with love and plenty of happy tears. The couple had a first look, and Scotty stated it was at that moment when it really hit him that they were getting married. During their first look, Scotty gifted Gabi a necklace with a small silver cross, which she wore during the wedding. For Gabi, one of her favorite moments was the first look with her father. It was a very special moment for both of them, and she highly recommends it to any bride-to-be. One of Scotty’s favorite parts was writing his own vows. The morning of, he took his laptop and his Bible out to the cliffs by himself and poured his heart out into words.

The happy couple honeymooned at the Four Seasons Bora Bora in a luxury bungalow sitting on the water. They spent their days jet skiing, riding ATV’s, exploring the island, learning about the island’s culture and history, and enjoying the freshest seafood they’d ever eaten. Gabi said that she was “completely obsessed” with the mango juice on the island and since she returned home, has tried endlessly to find a mango juice that compares.

Custom by Aaron McGrill of Only One Tailoring